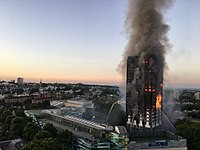 "Paddy Murphy and David Spalding of the North Wales Bridge Association, and Anna Gudge of ECatsBridge would like to thank all the players who took part in the event we ran to raise money for the victims of the Grenfell Tower Fire in London.

We were very touched to know that players in Norway would come and support the event at your bridge festival, and help to raise so much money.
It will be donated to Grenfell Tower appeal as part of the charity “The London Community Foundation” (Registered Charity No. 1091263) which has been set up to directly help the victims of the fire."